In science class, we learned about the four states of matter: solid, liquid, gas, and plasma. We did projects and experiments to help us better understand these states. We recently did an experiment with boiling water in freezing temperatures (-20 degree Fahrenheit). 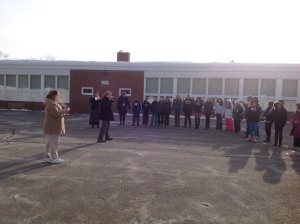 When the sixth grade arrived at school, it was -20 degree Fahrenheit outside. The whole 6th grade went back outside and Ms. McCrone announced that she had hot water (which was boiling for 30 minutes) and that she was going to throw it into the freezing cold air.

Based on the class work we have been doing, we all thought the water would instantly turn into ice when released from its hot container (freeze in mid-air). That wasn’t the case but we were not far off. The water had frozen in mid air, but not the way we thought it would. Since the water boiled and it was released into the air, it was closer to steam than water. It broke into tiny water droplets. Because the water droplets had so much surface area, a lot of evaporation took place, quickly taking the heat out of the droplets. This appeared to be a cloud, which was really a cloud of water vapor. This cloud sank to the ground because it was frozen water vapor and heavy.

Who would have thought that we could find a good reason to have -20 degree temperatures!